If you've visited this blog before, you may be thinking something's different this time.  You're not mad: I replaced the blog banner with one I created using my new Photoshop scratch board method.

I started with an image I used for the 2011 holiday season.  This I had drawn with pen and ink, and then added a watercolor wash to highlight the text, the people, and the doors (for a touch of rhythm).

I opened the scanned image in Photoshop, then inverted the colors and began to scratch away.

I kinda like the look mid-process, as the images are emerging from the blackness.  I may have to play around a bit more with that effect.

I liked the way the cars looked with the street still black, but because of the positioning of the text, the high contrast between street and sidewalk made it hard to read the words, no matter which color I filled the letters with.  I ended up scraping away most of the black of the street.  I guess its concrete instead of asphalt.

I drew the image above first in pencil, then inked it with a Pigma Micron size 01 pen in an old hard-sided wirebound sketchbook with good qu... 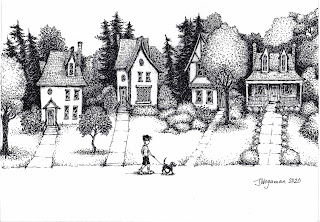